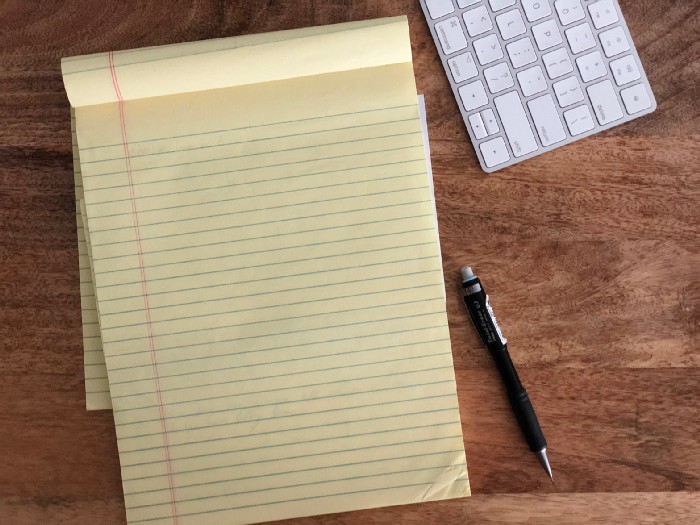 According to legend, Thomas Holley invented the first legal pad in 1888.

At the time, he was working at a paper mill in Massachusetts. He had the idea to stitch together the leftover paper and sell it as a cheaper notepad.

Holley then went off to start a business making these substandard pads. And the legal pad was born. The first pads Holley sold were actually white. And no one is sure why it became yellow. One theory is that it was difficult to bleach the substandard paper. And it was easier to make the pads darker instead. The legal pads shifted towards yellow.[1]

What matters more than the how the first pad became yellow is why the yellow stuck. Yellow indicates to writers that these pads are low-pressure to write on. They’re substandard and cheap.

The first legal pad adopters — lawyers — wrote tons of notes, drafts, and revisions. It would be expensive to write all of this on premium paper [2]. So, lawyers were happy to adopt cheap, low-pressure pads for the bulk of their writing.

The legal pad became more widely adopted as a place for low-pressure writing. Legal paper is cheap. Get everything down and don’t worry about it being pretty.

When we moved to digital notes, the legal pad became even closer to its essence. It became lower-pressure. Instead of cheap but finite paper, we now have nearly unlimited digital storage. The digital scratch pad is also more convenient.

Texting. Texting has taken over as a writing format that’s even more comfortable to write in than a blank sheet of paper.

Modularity matters because modular notes are easier to organize later, one small step at a time. The result is a digital scratchpad that’s better organized.

This is the future of the legal pad that we’re building at Bytebase.

Want to join our Beta?

Bytebase is the fastest way to write and organize notes. It’s the evolution of the legal notepad that serves the way you actually work — and helps you be just a little more organized. Try it out at https://bytebase.io